How to put on bed sheets - Ethical Bedding

HOW TO PUT ON BED SHEETS

Putting on bedsheets isn’t always as simple as it sounds! Even once you’ve got all the separate pieces the right way around and in the right order, you can still end up waking up in the middle of the night, tangled up in one sheet or another.

We’ve come up with some clear instructions to guide you easily through the process.

2. When to Put on Bedsheets

3. How to Put on Bedsheets

b. Put on Bottom Sheet 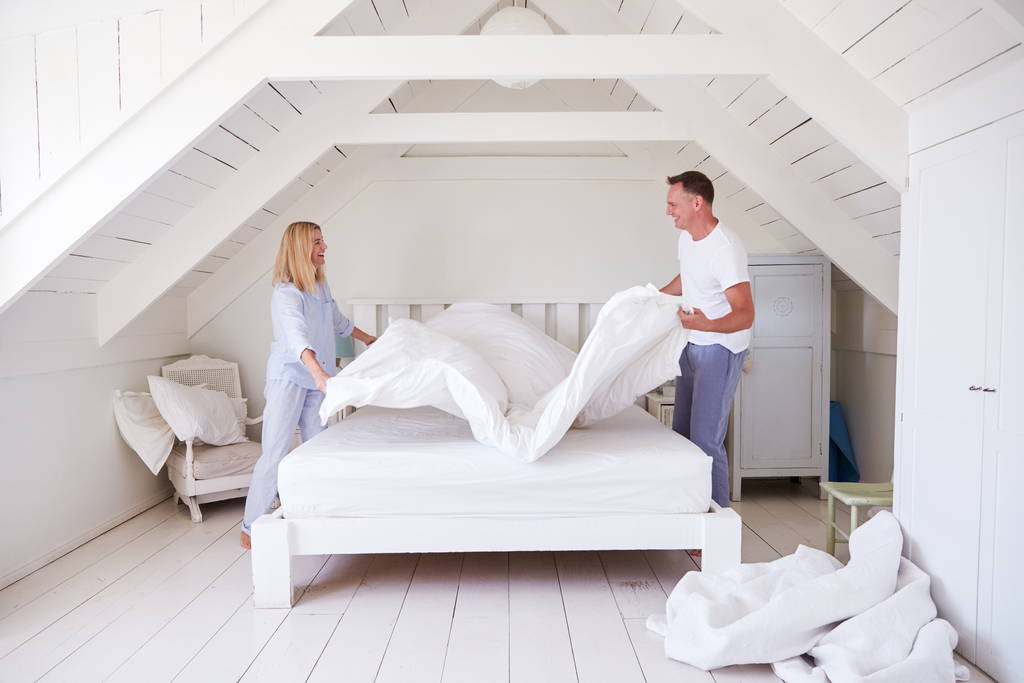 The mattress protector has the power to save you from a lot of potential trouble. It provides a barrier between the mattress and your other bedsheets and, as the name suggests, its main purpose is to keep the mattress clean and unharmed.

The bottom sheet is more commonly known as the fitted sheet. It can come as either a plain sheet or a sheet with elasticated sides. Elasticated bottom sheets are much more popular these days as they are easier to put on a mattress with less risk of coming off.

Buying too big will result in a messy appearance and increased chances of coming off during use. A fitted sheet that is too small will likely not even be able to stretch properly over the mattress corners.

The top sheet has started to become a contentious topic. It has been a staple part of the bedding set for centuries, typically topped with blankets and quilts. The top sheet provided a comfortable pocket for sleepers to drift off in that keeps you safe from chilly drafts throughout the night.

It is also an easy to clean option as it is a non-bulky, machine-washable, easily-removal sheet that can be washed and replaced quickly and easily, meaning that the thick and bulky blankets on top don’t need to be washed as frequently.

However, as the duvet, complete with equally removable and lightweight duvet covers, increased in popularity throughout the 1960s and 70s, the need for top sheet has diminished.

Instead of the classic combo of a top sheet and a number of blankets (depending on the season), duvets of various tog numbers and easily changeable duvet covers have taken over.

Despite the duvet’s popularity, there are many people who still use a top sheet, either instead of a duvet or alongside one. Additionally, the use of a top sheet alone is still a popular practice in countries with warmer climates where the warmth of a duvet simply isn’t needed.

Duvets are cosy, comfy and perfect for keeping you warm on chilly nights. They come in different sizes to match the mattress but there are no strict rules about which sized duvet you should buy, although the duvet cover does need to be the same size as the duvet.

Typically, if you have a double bed, you would get a double sized duvet. However, some people may prefer a duvet bigger than their bed for extra cosiness and wiggle room. Additionally, two people sharing a bed may have different ideal sleeping temperatures so may use two separate duvets of different tog levels – this also prevents duvet hogging!

The final items on your essentials list are pillows and accompanying pillowcases. Pillows are absolutely necessary for a comfortable and healthy night sleep as they keep the head aligned with the backbone.

There are many versions of the actual pillow available, varying in size, fabric and material. The ideal pillow is different for different people depending on how they sleep and personal preference, although most people prefer fluffy, plush pillows.

Pillowcases are typically purchased along with the duvet cover so that the fabrics, colours and patterns match to create a more stylised and put-together aesthetic in the bedroom.

The pillowcase fabric should also be carefully considered. This is where you’ll be resting you face for multiple hours every day and can have an effect on your skin. Choosing a soft fabric like silk or Tencel™ is the best option for pillowcases as they are the least abrasive and are more hygienic as they have anti-bacterial and hypoallergenic properties.

2. WHEN TO PUT ON BED SHEETS

After taking off one set of bedsheets and putting them in the wash, give your mattress a few hours to air out. Open your window to give it access to fresh air and, if possible, put the mattress in sunlight. Make sure you don’t use the mattress during this time to keep it as fresh and clean as possible.

Once a few hours are up, you’re free to put your bedsheets on before experiencing the pure joy of sliding between fresh, clean sheets.

3. HOW TO PUT ON BED SHEETS

The vast majority of mattress protectors have elastic corners which helps fasten it to the mattress and prevent it from falling off.

Despite their extra cushioning, mattress protectors don’t tend to be very bulky. So, if there are any spills or stains on the mattress protector, it can easily be removed and washed in a normal washing machine.

Once you have the correct size fitted sheet for your mattress, start by placing it on the mattress in the right orientation. Starting at the top of the bed stretch one corner of the sheet over the mattress corner so that it rests underneath the mattress with the elasticated seam stretching the depth of the mattress.

Repeat for each of the corners of the sheet. Due to the elastic nature of the sheet, the final corner will require a gentle pull to get the sheet all the way over the mattress corner. This will result in a smooth, taut sheet fitting neatly over your mattress and mattress protector.

If the bottom sheet is not elasticated, simply place the sheet on top of the mattress and move around the bed, tucking the sheet carefully under the mattress. The sheet will need to be tucked a decent amount and pulled tight to prevent the sheet from coming loose.

Once complete, pull the top of the top sheet back about six inches to create a lip that opens easily for you to slip inside. If you are adding blankets, quilts, or a duvet on top of your top sheet. Wait until they have been arranged appropriately and then pull the lip of the top sheet back, so it covers all of the additional materials.

Putting the duvet cover on a duvet can sometimes present a bit of a challenge, especially for double sized sheets or bigger. For every sized duvet sheet, the first step is to line the duvet cover up with the duvet so that it is definitely the right way around.

The pillows complete the bedding set both functionally and aesthetically so it’s important to get them right. A single bed needs only one pillow whereas a twin bed needs two. Anything larger requires two pillows for each side, totalling four.

However, these loose rules are open for interpretation and the number of pillows really depends on personal preference, as long as each person sleeping has at least one functional pillow. Beyond that, you are free to add as many decorative pillows as desired.

Your bedroom should be a safe, cosy and welcoming place tailored exactly to your needs and preferences. Make your sleeping space unique by adding blankets, throws and pillows in your favourite colours or designs. 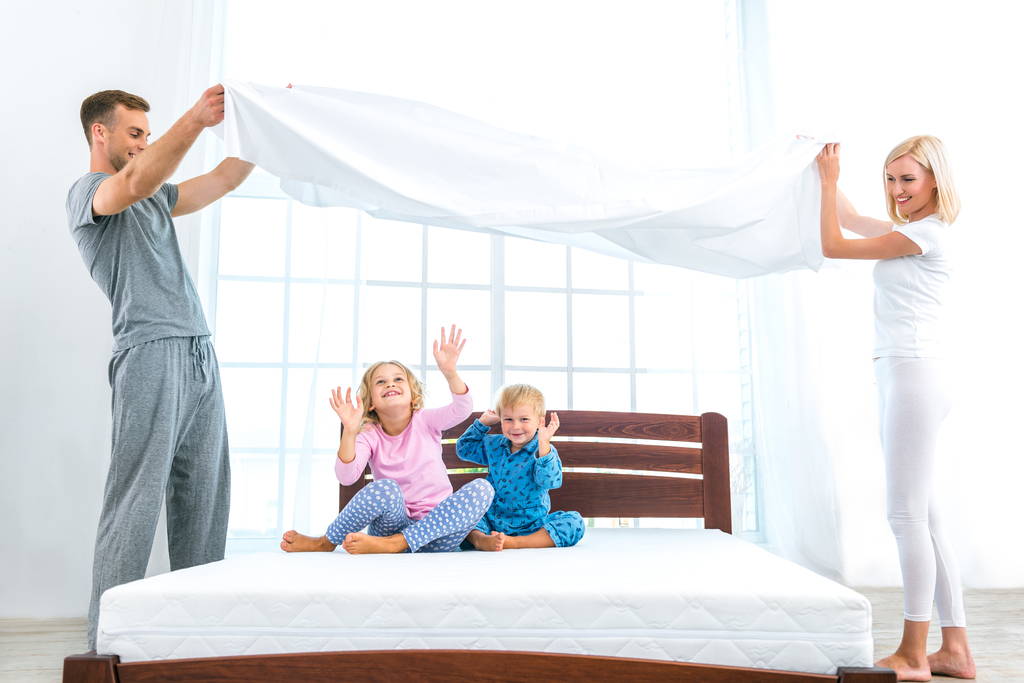 Back to Luxury Bedding Guide